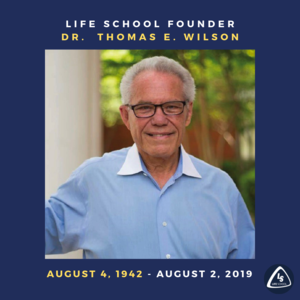 Combining vision, character, and education into a legacy that will last for generations to come, Life School Founder, Dr. Tom Wilson, passed away last Friday, August 2, 2019.

Combining vision, character, and education into a legacy that will last for generations to come, Life School Founder, Dr. Tom Wilson, passed away last Friday, August 2, 2019.


The admired community leader launched a tuition-free charter school, called Life School of Dallas, where he served as Superintendent and Founder from 1998 to 2010. What began as one of the first charter schools in Texas with only 15 faculty and staff members serving 266 students, has now flourished into nine campuses serving nearly 6,000 students across county lines.


Dr. Wilson’s commitment to the transforming power of education was demonstrated through his own determination to complete his doctorate in education at the age of 62. Mirroring the mission of Life School, Dr. Wilson empowered the development of leaders with life skills through strong academics, character training, and partnerships with the community.


His life and legacy will continue because of the strong foundation he created and the impact he made on thousands of students, staff, and families.


In a phrase Dr. Wilson coined, remains stitched into the fabric of Life School, stating,


“Knowledge and understanding can be instilled in these young people, and it will carry them to the top of a mountain. But they will fall off a cliff if they do not have character that is able to keep them there.”